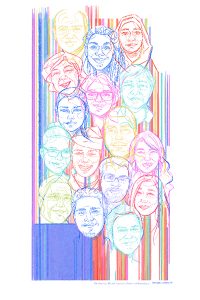 The Diversity Thread: America's Fabric and Foundation, by Kyleen Johnsson

Artist Statement:
For this piece I plan to use the idea of the American flag as a tapestry, people would be drawn in bright, vibrant colors. These colors would interact with each other, blending to show the differences but also the influence we have on each other. All of these lines would lead to the bottom to form part of the flag, the "threads" incorporated and combined to show the complexity of our nation and also its unity.

For information about purchasing a full size print, click here.

Lawrence Stephen Partners sponsored a competition among junior and senior Illustration majors at the Cleveland Institute of Art to design an image that reflects the importance of diversity and immigrants to America.

“We felt it was important to celebrate the importance of diversity and America as the melting pot of the world’s cultures, with its historical embracing of people from all over the world and from all walks of life,” said Larry Imely, LSP’s CEO. “We want to underscore the importance of a diverse workforce within the United States, and that the fabric and foundation of the country is interwoven into our everyday culture. We have a longstanding relationship with the Cleveland Institute of Art, believe in and support its mission, and felt we could tap into the creativity of current students.”

The winning submission was from Kyleen Johnsson, a junior from Louisville, KY. Kyleen drew her inspiration from her Norwegian grandparents. “For my artist rendition, I wanted to use the idea of the American flag as a tapestry, and the people in it would be drawn in bright, vibrant colors, showing both how we interact with each other and also the influence we have on each other. The threads of the flag are incorporated and combined to show the complexity of our nation and also its unity,” Johnsson said.

Illustration faculty member Kelsey Cretcher, a 2012 graduate of CIA, facilitated the project at CIA.  “There were so many intriguing and creative ideas brought forth,” Cretcher said. “That represents the caliber of the CIA student population as well as the diversity this competition was established to underscore and applaud.”

Grafton Nunes, CIA’s President + CEO, heralded the project. “This is a wonderful partnership in celebration of our shared values,” Nunes said. “We are proud to work with Lawrence Stephen Partners in a project that reminds us that we are all better when we embrace our differences.”

The artwork, titled “The Diversity Thread: America's Fabric and Foundation," will be published in color in an 18-by-30-inch format. It will be delivered to past and current clients of Lawrence Stephen Partners, leaders in HR and talent acquisition at Fortune 500 firms, and colleges and universities. Prints will be available through the LSP website at a nominal cost. The intention is to promote the importance of diversity and immigration to the United States, both in building the country as it has and in shaping it for our collective future.

“We are a nation that has been built by individuals who came from all over the world, seeking a better life for themselves and their families,” Imely said. “In doing so, they have been a part of creating the most unique nation on Earth.”

Kyleen Johnsson is an Illustration student attending the Cleveland Institute of Art set to graduate in 2019. Originally from Louisville, Kentucky, she has a background in traditional oils and a love for story telling. Her preferred mediums are gouache and digital painting and she hopes to pursue Children's Illustration in the coming future.